I remember so vividly, this morning, 10 years ago.  I was working from home that morning, after taking my 6-year old daughter to school, since my wife was ill.  The phone rang, and it was my wife's friend, telling us the news.  Emotions fluctuated from fear to rage, from love to patriotism, from sorrow to thoughts of vengeance.  The intensity of those moments pushed my wife's illness to the background, as we considered whether we should go pick our daughter up from school.  We knew that what had occurred was a turning point in history, and that things would never be the same.  When we decided to leave her at school until dismissal, we pondered how we would possibly explain this unprovoked attack on innocents in our nation.

All day we watched the events unfold on television, in continued amazement.  Our daughter now understood that evil men from the other side of the world had violently attacked us in the name of their god.  We all began to understand about an organization called al Qaeda, and a terrible man named Osama Bin Laden.  The faces of Mohammed Atta, and others became burned into our minds, along with, of course, the horrifying images of the aftermath in New York, Washington, and Shanksville. 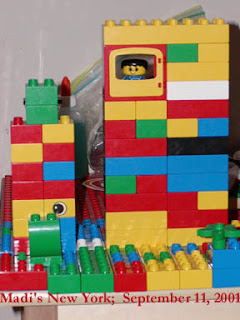 As we learned about the heroic efforts of men and women in NYC, and in the skies over Shanksville, we felt hope.  That evening, our daughter called us into the hallway, where she had been playing with her Lego table.  She proudly announced to her mom and me, that she had "rebuilt the towers" for New York. We instantly knew that even at 6 years old, she understood the gravity of this event.

We have been through so much since that time.  It brought us all closer together, nationally, as well as at home.  It helped us as a nation, and personally, to appreciate our lives, and also to understand the fragility of our fortune, and the importance of vigilant protection of our precious families, and our precious freedom.

Today, my beautiful daughter is sixteen, and my precious wife has gone home to join our Lord in Heaven.  So much has changed in these 10 years, but I pray we never forget.