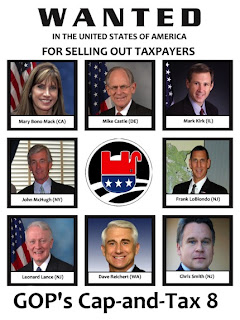 EIGHT "Republicans" voted "yay" on yesterday's climate change bill in the house. If only four of them had voted the right way, this horrible bill would be dead. The worst part is, no one really read the bill. I think it's safe to say that 100% of those voting were not fully aware of what they were voting on. In defense of those voting "nay", it didn't take much reading to realize how bad this piece of legislation really was. Representative John Boehner made a valiant attempt at a filibuster, by reading only selections from the 300+ page amendment that was submitted after 3 am yesterday.

I hope that the "RINO 8" are all challenged by real conservatives in the next election cycle. I also hope that this is a turning point. I believe that the American voters will have to know that this bill is dangerous, and will punish those that supported it by returning them to the private sector next year.

Let's just pray that the Senate has a little more sense than the House. Maybe they'll actually read the bill before bringing it to vote. If not, we will be facing the most massive "hidden" tax increase in the history of mankind. If this bill does become law, it should trigger a big shift in power back to conservatives. Democrats will then be responsible for deepening and prolonging the recession, and will surely be driven from power. At that time, with REAL conservatives back in office, we can just repeal the legislation and get things right again.

Jarhead, I think you are my only reader, but I keep blogging!