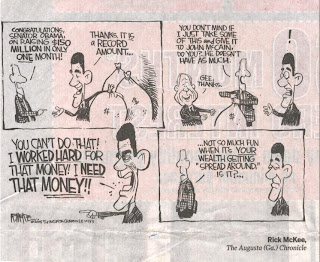 My mom emailed me the cartoon above. Below is from an email I received, allegedly from an Orange County, CA newspaper...

Today on my way to lunch I passed a homeless guy with a sign that read "Vote Obama, I need the money." I laughed.

Once in the restaurant my server had on a "Obama 08" tie, again I laughed as he had given away his political preference--just imagine the coincidence.

When the bill came I decided not to tip the server and explained to him that I was exploring the Obama redistribution of wealth concept. He stood there in disbelief while I told him that I was going to redistribute his tip to someone who I deemed more in need--the homeless guy outside. The server angrily stormed from my sight.

I went outside, gave the homeless guy $10 and told him to thank the server inside as I've decided he could use the money more. The homeless guy was grateful.

At the end of my rather unscientific redistribution experiment I realized the homeless guy was grateful for the money he did not earn, but the waiter was pretty angry that I gave away the money he did earn even though the actual recipient deserved money more.

I guess redistribution of wealth is an easier thing to swallow in concept than in practical application (ask the waiter)
OR IS IT.........REDISTRIBUTION OF SOMEONE ELSE'S WEALTH IS A GREAT IDEA..............or just a fools game !!