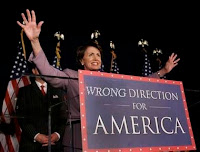 When the democrats, led by Pelosi and Reid, took control of both houses of congress after the 2006 election, I advised all of you to "hide your wallet". Two years later, this congress has the lowest approval rating in history, and miraculously is poised to GAIN seats in both houses. This potential "super-majority", combined with an Obama presidency, compels me to repeat my warning. There would be nothing in their way.

PLENTY OF 'RICH PEOPLE' TO TAX