How can Obama and company blame Bush for this one?

Oh yeah, that's straight from the Dimocrat playbook: foul something up royally while serving your own political interests, then when it blows up on you, BLAME BUSH.

In the last week, I have heard Obama, Hillary, and all the usually suspects singing this chorus.

Senator Hillary Clinton said it's important to learn from what went wrong so the country can assess what needs to be done. She also said the Bush administration failed to admit a crisis had been brewing.

"What we have seen over the course of the last eight years is an administration that refused to recognize the threats lurking in our economy, no matter what lurked just beneath the surface, or what problems were facing middle class families," said Clinton.

However, the man they blame was warning about this exactly 5 years ago, when proposing reformed oversight for Fannie Mae and Freddie Mac in September of 2003!! He was met with fierce opposition from Democrats, including Rep. Barney Frank (D-MA), and Rep. Melvin Watt (D-NC):

''These two entities -- Fannie Mae and Freddie Mac -- are not facing any kind of financial crisis,'' said Representative Barney Frank of Massachusetts, the ranking Democrat on the Financial Services Committee. ''The more people exaggerate these problems, the more pressure there is on these companies, the less we will see in terms of affordable housing.''

''I don't see much other than a shell game going on here, moving something from one agency to another and in the process weakening the bargaining power of poorer families and their ability to get affordable housing,'' Mr. Watt said.

Hmmmm. My brother always says to follow the money. The Bush Administration saw this coming and tried to take action 5 years ago. Democrats on the take blocked him. 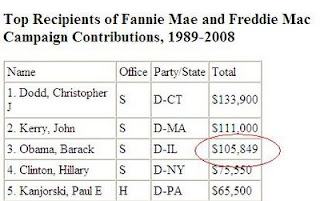